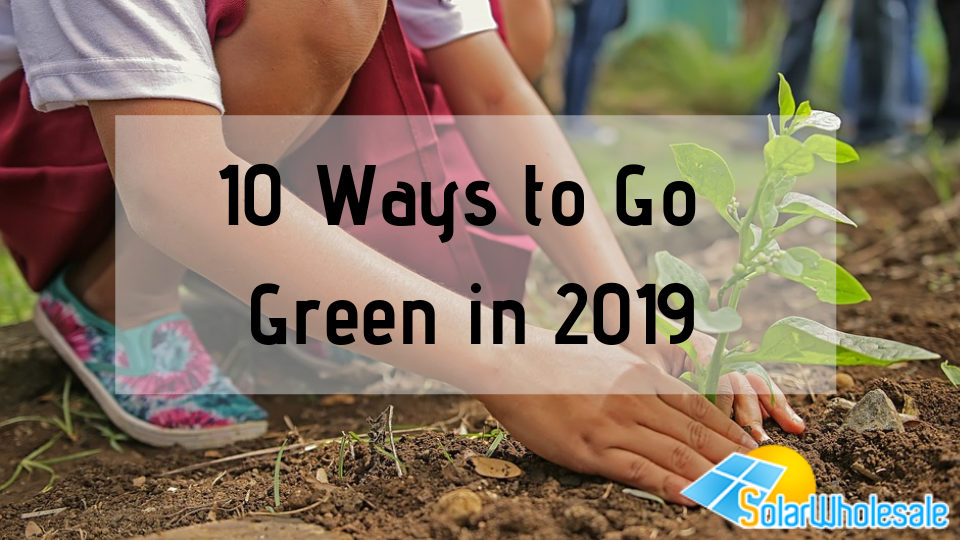 It’s up to each of us to do our part in cleaning up the world and reducing pollution. Going green doesn’t mean you have to live like the Amish. There are simple steps you can take that can make a big impact on the planet without making a big impact on your lifestyle. Why not make going green (or at least a little greener) your new year’s resolution?

One of the biggest sources of pollution and greenhouse gasses is cars. According to cartalk.com, “Burning one gallon of gas creates 20 pounds of carbon dioxide, and the average car emits about six tons of carbon dioxide every year.” Holy cow that’s a lot of CO2!

Over the years cars have gotten better and better at producing less and less pollution but it’s still a major issue. If you have an electric or hybrid car, that’s awesome! But for those of us that still drive gas guzzlers one great way to go green is just by driving less. Here are a few ways to drive less

Food takes a lot of energy to grow, make, package, store, ship, etc. Unfortunately, food waste in America is off the charts; It’s estimated that food waste is 30% – 40% of the food supply. Food is so abundant here that it’s easy to take for granted. Leftovers and past-its-prime produce can take up room in your fridge without you realizing it until it’s time for a purge.

Another step you can take to reducing food waste is by composting. This is a great eco friendly way to reuse the food that does need to be thrown away. Otherwise your food scraps will just end up in a landfill. By composting your food waste you’re at least reusing it for a better purpose.

We already talked about how food can take a toll on the environment. That’s why it’s best to go loca and seasonal as much as possible. The more local the better because that means it doesn’t have to travel as far.

One way to try to get as local as possible is to buy what’s in season. Strawberries just don’t exist in most of America during January. In the united states we import a lot of these foods that aren’t in season from places as far away as Chile. That’s a lot of energy, oil and gas that has to be spent just to get these out of season foods to your doorstep.

Meat accounts for about 18% of all greenhouse gasses – that’s even more than transportation – adding an estimated 6.5 billion tons of greenhouse gasses each year. Cows are by far the worst, they produce tons (literally) of methane. If you’ve ever visited a ranch or a farm with cows you know they’re gassy but you might not have known they were greenhouse gassy.

That’s why making an effort to eat less meat is a great way to go green. Have fun experimenting with some meatless protein options or adding fillers like mushrooms to your burgers. Or you could try going meatless one day a week. Meatless Monday is popular among many meat eaters.

Plastic bags have become such a simple staple of life. You can find them in just about every store and home. They’re not only convenient when you’re bringing home your groceries, there are so many ways to reuse them as well! And when you’re done you can easily throw them away. But that’s not where their story ends. Researchers say that these seemingly harmless plastic bags can take at least 400 years to biodegrade.

Reusable bags have become so common and so cheap there’s really no excuse not to use them. They come in all sizes, colors and designs so they’re even pretty and more durable than the cheap, thin bags you get at the store. Keep a supply in your car so you don’t even have to remember them next time you go to the store.

Just like plastic bags, plastic bottles are made of cheap single use plastic. They end up in landfills in mass amounts. These water bottles can be very convenient which is why people love them so much. Plus they come filled with clean filtered water.

Not everyone will plant a tree this year but you can! You might even consider planting a fruit tree. It will do double duty of helping clean the air and also give you organic fruit that you can enjoy for free!

There’s almost no reason to get physical mail now and days, sad as that may be. You can and should still send letters and cards. I mean who doesn’t like getting good mail? I’m talking about the mail that nobody wants – like bills, junkmail, catalogs, bank statements, etc.

Most bills have the option to pay online so why not do that. You’re most likely already paying that bill online anyways, why not set a reminder on your phone to go online and pay instead of waiting for the bill to come in the mail. You’ll save a tree that way!

Speaking of water, water waste is another challenge as drought increases especially here in the Utah/Idaho area of the United States. Reservoirs are throughout the west are at an all time low and so is rainfall. That makes water conservation a big deal.

Here are a few ways that you can contribute

Eating locally also means that you’re getting the freshest quality possible. You just won’t get as fresh of quality when the food is imported from a farm hundreds or thousands of miles away. And on top of that you can feel good knowing you’re supporting your local economy.

Did you know that solar panels emit zero greenhouse emissions?

Solar panels aren’t just great because they’re good for the environment though, they also help you save money in the long run. Solar panels will help you cut down on your power bill – everyone likes free money so you can’t argue with that.