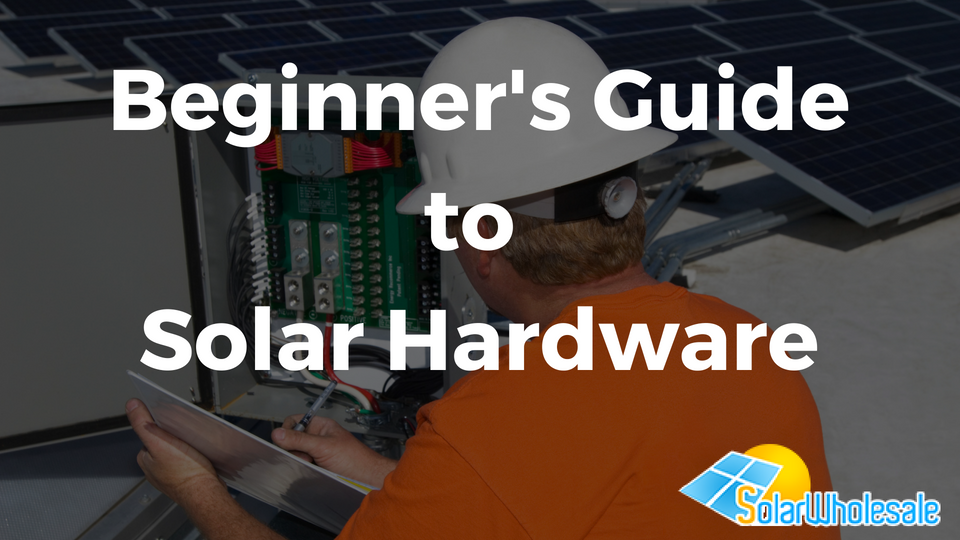 Whether you’re doing going DIY or having a professional install your solar panels there are a few things you need to know in order to get started as far as hardware goes. Knowing your basics before you dive in will help you get a lay of the land.

Every solar panel system needs a few basic parts and pieces to do it’s thing. Obviously you have your solar panels but there are a few other crucial parts too. Next to solar panels the most important piece of hardware is your inverter. Then you’ve got the nuts and bolts of putting it together with the mounting hardware and the cables.

In this article, we’ll be reviewing the major pieces that require you to make an educated decision.

There are two types of solar panels, monocrystalline and polycrystalline. Ultimately the choice is up to you on which type of panel to choose but here are few of the main points to understand.

While it’s important to pick good quality solar panels that will work for your home, inverters are arguably the more important component to focus on. If you’re going to invest money in one part of your solar system, it should be the inverter. Poor quality inverters can burn out in just a few years. Plus, picking the right inverter will allow you to get the most out of your panels.

There are three types of inverters to consider: string inverters, micro inverters, and optimizer inverters.

A string inverter is a big box that sits next to the AC panel in your home. All the solar panels are connected to one inverter box which then feeds power into your home.

This is the least efficient inverter option and one panel being shaded can affect the efficiency of the whole system. Think of a string of Christmas lights, one goes down and it brings down the whole system.

Unlike a string inverter where every panel feeds into one inverter and then power gets funneled into your home, each panel get its own individual micro inverter. This is a much more efficient system in comparison to string inverters. One individual panel being shaded won’t bring down the system as a whole.

This is our recommended option. Optimizer inverters maximize the output of each individual panel by tracking the maximum power point. They work much like a micro inverter but without putting as much strain on the system.

This will be the last piece of hardware we review in this section. With solar panel mounting you really have two options, roof mounting or ground mounting. Roof mounting is obviously the most realistic and common option for homeowners unless you have a lot of land and space.

The best angel for your solar panels is the angel of your roof. There’s nothing complicated here which means all you have to do is mount them straight to your roof. You don’t need to worry about adjusting your mounts to a perfect angle or anything like that.

At Solar Wholesale we’ll help you design the perfect set up based on your home and your roof to maximize sunlight. We have an EZ permit and design option that’s perfect for DIYers. We give you a shade analysis and sun report so you can create your own optimized system.

Do I Need a Battery?

When people are new to solar they often wonder if they need to include a battery in their system. The short answer is no, the long is answer is not yet.

Solar powered batteries work by storing extra energy produced by your panels during the day and then feeds that power back to your home at night when your solar panels are no longer producing energy. It sound like a great idea, but the technology hasn’t been able to deliver on the promise quite yet.

The most well known, or at least the most talked about, solar power battery right now is the Tesla Powerwall. With the amount of money a Tesla Powerwall will save you on your power bill, you’re looking at a payback period of 30+ years. That’s right it will take more than 30 years for a Tesla Powerwall to pay for itself.

Unfortunately the warranty only lasts 10 years and chances are it will probably end up breaking down not too long after that warranty runs out. Which means you’ll be left holding the bill.

This technology is still relatively new and until these batteries become more efficient and the payback period shortens, there’s really no need to buy a battery yet.

Choosing the right hardware for your DIY Solar panel system is key. You want to get the most bang for your buck so make sure you’re choosing a system that’s going to work well for your home.

At Solar Wholesale we can help guide you through the process from start to finish with free live demonstrations. Follow us on Facebook to get updates on when our next DIY solar class is!