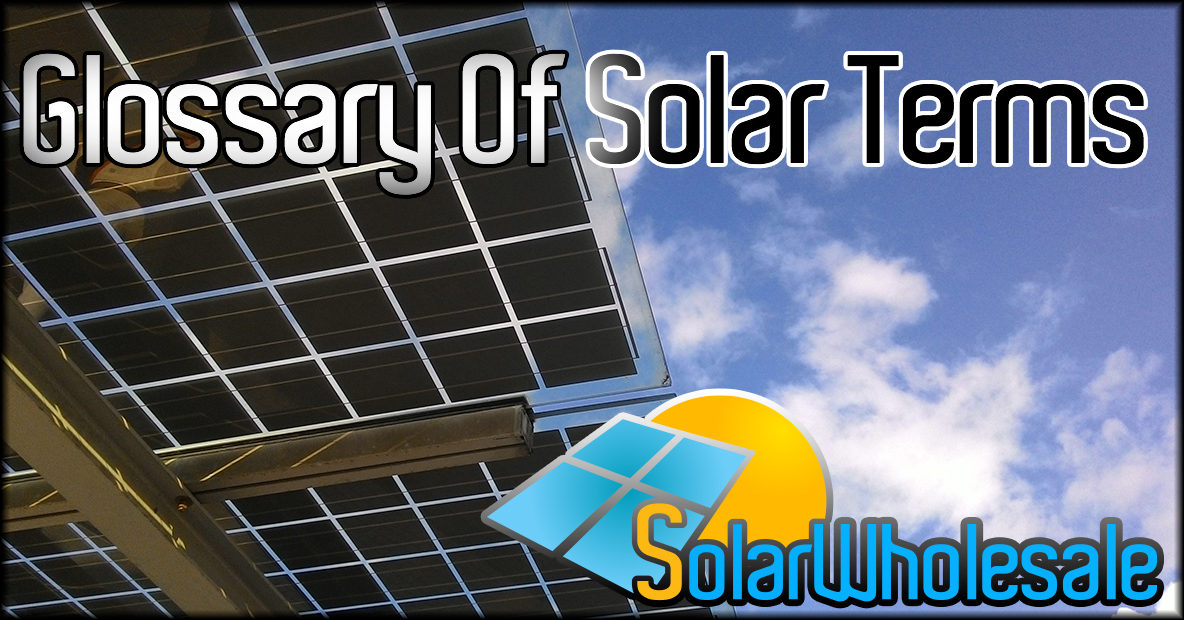 Alternating Current (AC) – The flow of electricity that constantly changes direction between positive and negative sides. Almost all power produced by electric utilities in the United States moves in current that shifts direction at a rate of 60 times per second.

Ambient Temperature – The temperature of the surrounding area.

Ampere (Amp) – The unit of measure that indicates how much electricity flows through a conductor. It is like using cubic feet per second to measure the flow of water. For example, a 1,200-watt, 120-volt hair dryer pulls 10 amperes of electric current (amps = watts/volts).

Ampere-Hour (Ah/AH) – A measure of the flow of current (in amperes) over one hour; used to measure battery capacity.

Annual Solar Savings – The annual solar savings of a solar building is the energy savings attributable to a solar feature relative to the energy requirements of a non-solar building.

Average Demand – The energy demand for a given location over a period of time. For example, the number of kilowatt-hours used in a 24-hour period, divided by 24 hours, tells the average demand for that location in that time.

Avoided Cost – The amount of money an electric utility would need to spend for the next increment of electric generation to produce or purchase.

Azimuth Angle – The angle between true south and the point on the horizon directly below the sun.

Battery – Batteries are often sold with a solar electric system. The primary purpose is to store the electricity not immediately used, which could be used at some later time.

BIPV (Building-Integrated Photovoltaics) – A term for the design and integration of photovoltaic (PV) technology into the building envelope, typically replacing conventional building materials. This integration may be in vertical facades, replacing view glass, spandrel glass, or other facade material; into semitransparent skylight systems; into roofing systems, replacing traditional roofing materials; into shading “eyebrows” over windows; or other building envelope systems.

Btu (British Thermal Unit) – The amount of heat required to raise the temperature of one pound of water one degree Fahrenheit; equal to 252 calories.

Capacity Factor – The ratio of the average load on (or power output of) an electricity generating unit or system to the capacity rating of the unit or system over a specified period of time.

Circuit – One or more conductors through which electricity flows.

Concentrator – A photovoltaic module, which includes optical components such as lenses (Fresnel lens) to direct and concentrate sunlight onto a solar cell of smaller area. Most concentrator arrays must directly face or track the sun. They can increase the power flux of sunlight hundreds of times.

Converter – An electrical apparatus that changes the quantity or quality of electrical energy.

Crystalline Silicon – A type of photovoltaic cell made from a slice of single-crystal silicon or polycrystalline silicon.

Customer Load – The amount of power your site uses. Load may be expressed in kilowatts (capacity) or kilowatt-hours (energy). A site’s peak kilowatts generally refers to when electric demand requirements are highest.

Demand – The level at which electricity is delivered to end-users at a given point in time. Electric demand in measured in kilowatts.

Direct Current (DC)– The flow of electricity that flows continuously in one direction. Frequency – The number of cycles through which an alternating current moves in each second. Standard electric utility frequency in the United States is 60 cycles per second, or 60 Hertz (Hz).

Energy – The capability of doing work; different forms of energy can be converted to other forms, but the total amount of energy remains the same.

Energy Audit – A survey that shows how much energy used in a home, which helps find ways to use less energy.

Fixed Tilt Array – A photovoltaic array set in at a fixed angle with respect to horizontal.

Grid-Connected System – A solar electric or photovoltaic (PV) system in which the PV array acts like a central generating plant, supplying power to the grid.

Hertz – The unit of electromagnetic frequency that is equal to one cycle per second.

Interconnection – The linkage of transmission lines between two utilities, or between a utility and an end-user, enabling power to be moved in either direction.

Insolation – The solar power density incident on a surface of stated area and orientation. It is commonly expressed as average irradiance in watts per square meter (W/m2) or kilowatt-hours per square meter per day (kW·h/(m2·day)) (or hours/day). In the case of photovoltaics it is commonly measured as kWh/(kWp·y) (kilowatt hours per year per kilowatt peak rating)

Inverter – A device that converts direct current electricity to alternating current either for stand-alone systems or to supply power to an electricity grid.

Kilowatt (kW) – 1,000 watts. A unit of measure of the amount of electricity needed to operate given equipment. For example, a one kW system is enough power to illuminate 10 light bulbs at 100 watts each. (volts x amps = watts)

Kilowatt-hour (kWh) – The amount of kW produced over a period of time, or one kilowatt of electricity supplied for one hour. For example, a one kW system, if operating at full capacity for 5 hours will produce (or use) 5 kWh of electricity.

Maximum Power Point (MPP) – The point on the current-voltage (I-V) curve of a module under illumination, where the product of current and voltage is maximum. For a typical silicon cell, this is at about 0.45 volts.

Megawatt – One thousand kilowatts or one million watts. One megawatt is enough to power 1,000 average California homes. Meter – A device that measures levels and volumes of customer’s electricity use.

National Electrical Code (NEC) – Contains guidelines for all types of electrical installations. The 1984 and later editions of the NEC contain Article 690, “Solar Photovoltaic Systems” which should be followed when installing a PV system.

One-Axis Tracking – A system capable of rotating about one axis.

Orientation – Placement with respect to the cardinal directions, N, S, E, W; azimuth is the measure of orientation from north.

Peak Sun Hours – The equivalent number of hours per day when solar irradiance averages 1,000 w/m2. For example, six peak sun hours means that the energy received during total daylight hours equals the energy that would have been received had the irradiance for six hours been 1,000 w/m2.

Photovoltaic Cell or Module or Panel (PV) – A device that produces an electric reaction to light, thereby producing electricity.

Photovoltaic (PV) Array – An interconnected system of PV modules that function as a single electricity-producing unit. The modules are assembled as a discrete structure, with common support or mounting. In smaller systems, an array can consist of a single module.

Photovoltaic (PV) Conversion Efficiency – The ratio of the electric power produced by a photovoltaic device to the power of the sunlight incident on the device.

Polycrystalline Silicon – A material used to make photovoltaic cells, which consist of many crystals unlike single-crystal silicon.

Solar Energy – Heat and light radiated from the sun.

Solar Panel – Devices that collect energy from the sun (solar energy). This is usually solar photovoltaic (PV) modules that use solar cells to convert light from the sun into electricity, or solar thermal (heat) collectors that use the sun’s energy to heat water or another fluid such as oil or antifreeze.

Solar Resource – The amount of solar insolation a site receives, usually measured in kWh/m2/day, which is equivalent to the number of peak sun hours.

Solar Thermal – The process of concentrating sunlight to create high temperatures that are needed to heat fluids, like water (solar hot water) or to vaporize fluid to drive a turbine for electric power generation.

Stand-Alone System – An autonomous or hybrid photovoltaic system not connected to a grid. May or may not have storage, but most stand-alone systems require batteries or some other form of storage.

String – A number of photovoltaic modules or panels interconnected electrically in series to produce the operating voltage required by the load.

Tracking Equipment – Structure that houses PV modules and that can automatically follow the sun across the sky throughout the day to maximize output.

Volt (V) – The amount of force required to drive a steady current of one ampere through a resistance of one ohm. Electrical systems of most homes and offices use 120 volts. (volts – watts/amps) (volts = amperes x resistance)

Watt (W) – Electric measurement of power at one point in time, as capacity or demand. For example, light bulbs are classified by wattage. (1,000 watts = 1 kilowatt).