Top 4 Benefits of Adding Solar to Your Home 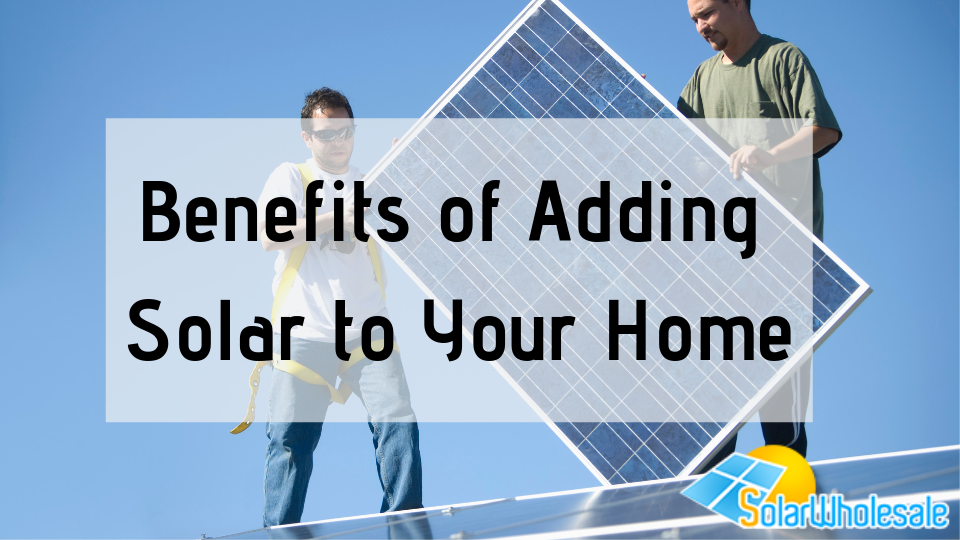 When debating to put solar panels on your home there’s a lot to consider. Mainly most people want to know if the pros and the benefits outweigh the cons and the price. Not every home is a great candidate for solar but luckily for us in the mountain west we’re in prime solar power territory.

Here are a few benefits of adding solar to your home.

Save Money on Your Monthly Power Bill

One of the top reasons why people add solar panels to their house is to save money on their power bill. With a purchase as big and expensive as solar, you want to know that it’s going to eventually pay for itself. And while many people are still skeptical about solar power it definitely lives up to its promise of paying for itself.

Depending on your power usage, system size and power company’s policies you can save big. In fact, solar panels help people save an average of 75% on their monthly power bill. Here at Solar Wholesale we have many customers who proudly show off their nearly $0 power bills.

We also encourage and empower customers to install their solar power system themselves. This also helps to reduce cost and shorten the payback period. We even offer DIY classes that are free to attend. This is a service that many other solar companies don’t offer or even discourage but with the right help we know you can install a working system yourself making it even more affordable for you. That’s a huge benefit!

Some people worry about adding solar panels to their home because they won’t live there forever. Why invest thousands in solar panels that you’ll eventually leave behind? This is a legitimate concern. The shortest payback periods are still around five years and many young and growing families don’t stay in their homes for that long. You certainly don’t want to be left holding the bill, literally!

Don’t worry about having to take the panels with you to get the most out of their value. Solar panels not only help to reduce your power bill, they can also add value to your home. No matter if it’s you using the panels or the person who buys your house, they’re still providing value and cutting power bills.

A small to medium sized system can add between $18,000 – $30,000 of equity. That’s a huge amount of equity! So even if you’re not the one using the solar panels and saving on your power bills you can bet that those solar panels will still help to pay for themselves. And with more and more people interested in solar, having solar panels on your home could be a major bonus for the right home buyer.

Depending on your state you can also claim tax credits from your state taxes as well. Utah’s solar tax credit ended in 2017 but many other states around the country still offer these credits to incentivise citizens to go solar.

Help Save the Planet

If the financial benefits aren’t enough just remember that by adding solar to your home you are reducing your carbon footprint. Your carbon footprint is how much carbon emissions you’re responsible for producing. It’s these gasses that cause global warming and all the consequences that comes with that.

The average American household produces 14,920 pounds of carbon dioxide each year. Yikes! And most single family homes produce more than that compared to townhomes and apartments. Many people feel unable to help the environment but with solar power you can make a significant dent.

It’s estimated that every kilowatt of solar power installed lowers your home’s carbon footprint by over 3,000 pounds annually. A small system is around 3.5 kW meaning that you’ll be reducing your home’s carbon emissions by 10,500 pounds each year! It’s a great way to do your part and help the environment and improve the earth for future generations.

Whether you’re interested in saving money or saving the planet, adding solar power to your home can help you achieve your goals. Adding solar panels to your home is a big purchase but with many financial benefits your solar panels will pay for themselves in no time and allow you to start reducing your carbon footprint while you’re at it.